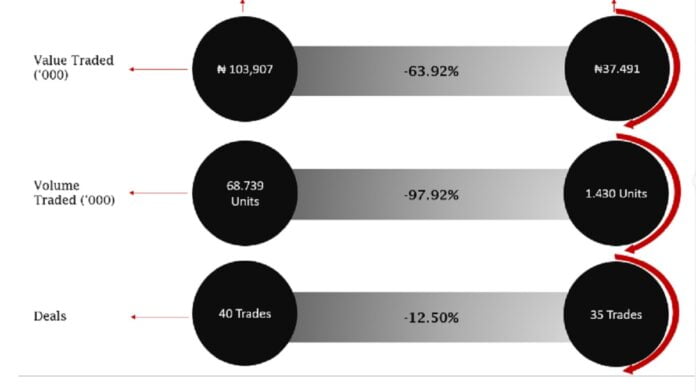 Following a moderate price appreciation registered, the OTC investors gain ₦0.05 billion, thus pushing market capitalisation up to ₦935.12 billion from ₦935.07 billion at the beginning of the week.

Investors’ wealth had bled due to price depreciation over the past week, dragging the market cap below the N1 trillion mark. READ: Market Cap of NASD OTC Falls to N1 Trillion

The OTC Securities Exchange Index closed the week with a positive movement, increasing by 0.01% to close the week at 711.66 points against 711.61 record seen in the previous week.

This translates to a 97.92% decrease in trade volume compared to the level of transactions reported in the previous week. Thus, the total volume traded for the year inched to 3,792,571,564 units.

UBN property Plc ranking top among the five most traded securities by volume, according to trading results. Afriland Properties Plc was the fifth most traded stock by volume traded in the week.

UBN Property Plc, which currently holds a market capitalisation of ₦5.57 billion closed the week at ₦1.00 representing a 1.01 percent increase from the previous close of ₦0.99.