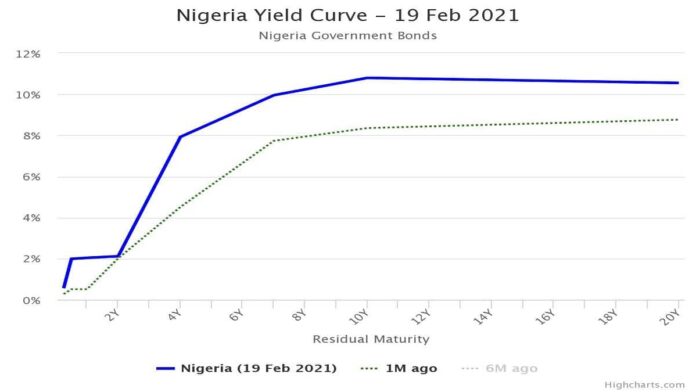 The financial system liquidity tightened was however tightened on Friday, opened lower at N207.6 billion from N582.8 billion yesterday.

Chapel Hill Denham said this resulted from a series of debits which hit the system, including settlement of the monthly bond auction – worth N206.5 billion, debit for OMO auction valued at N180.0 billion – yesterday, and provisioning for the retail FX auction.

Following the fresh supply of OMO bills yesterday, the OMO benchmark curve expanded by an average of 11 basis points (bps) to 6.02%.

Meanwhile, the Nigerian Treasury Bills curve was flat at an average of 1.45%.

However, the bond market yields expanded by an average of 11bps to 10.18% across the benchmark curve.

“Investors will be looking forward to the NTB auction holding next week to gauge the CBN’s views on the level of short term rates, particularly as the bond yield curve remains very steep”, analysts said.

The previous auction cleared at 1.0%, 2.0% and 4.0% respectively, analysts said odds are in favour of higher stop rates on Wednesday.

In the currency market, the naira remained unchanged at the official and SMIS windows at N379.00 and N380.69 respectively.