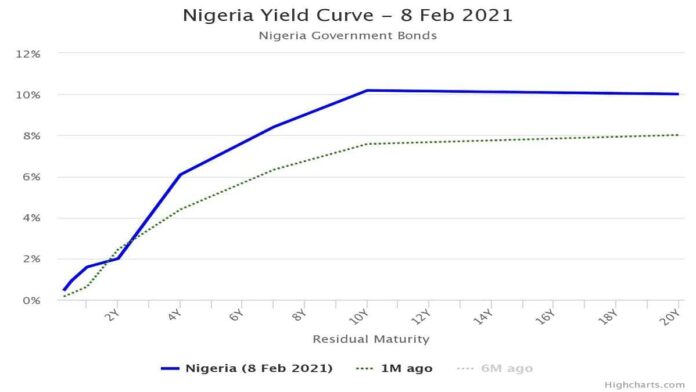 On Monday, the Nigerian treasury bills market commenced the new week on a calm note as trades settled flat across the tickers.

Consequently, yields remained at an average of 1.0%.

At this level, Greenwich Merchant Bank hinted the rate dropped off from 17.5% and 18.0% on Friday.

“We however note that the CBN will roll over all maturing T-bills instruments”, analysts at Greenwich Merchant Bank said.

Chapel Hill Denham noted that the OMO curve rose steeply with the average yield up 358 basis points or 3.58 percentage points to 5.67%.

Across the tickers, analysts at Greenwich said there were notable yield increases, even as the long end of the market was the most bearish.

In the Bond market, bearish investor sentiment persisted, following selloffs across the market.

The bearish charge in the market was most pronounced at the belly of the curve (+97bps), the short end (+26bps) then the long end (+14bps).

Notably, the highest yield increase was recorded on the 26-Apr-29 instrument (+159bps).

However, the naira was flat at the official, secondary market intervention sales, and parallel market windows to ₦379.00, ₦380.69 and ₦380.00 respectively.