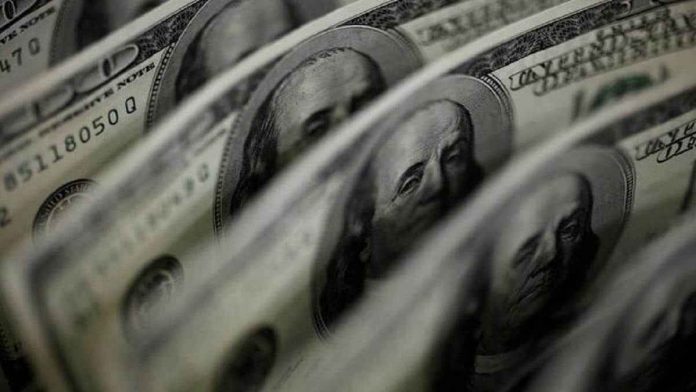 Nigeria: In the last five years, Nigeria has devalued its official exchange rate by more than 92% and the currency war has not been won –yet or perhaps unlikely.

Nigeria reintroduced foreign exchange rationing following the sharp fall in oil prices in 2015. According to Intentional Institute of Finance (IIF) in a report, the persistent opaque rules of foreign exchange allocation have created uncertainty for the private sector, encouraged smuggling, and enabled corruption.

It said the still-large spread between the official and parallel market rates has created arbitrage opportunities for a small segment of the population, including large corporations and the elite, who buy U.S. dollars at the official rate and sell at the parallel rate.

“A transparent, market-based exchange rate policy is needed to instill confidence and diversify the economy”, IIF posited; saying that a unified and flexible exchange rate system would also help to attract more non-resident capital flows, particularly FDI, which have dropped in recent years.

“A unification attempt should be accompanied by a significant increase in the policy rate to prevent excessive overshooting and contain inflationary pressures”, IIF advised.

Egypt has also had a run with its foreign exchange market.  According to IIF, following the Arab Spring in 2011 and the subsequent large non-resident capital outflows, Egypt’s official reserves dropped sharply, and the supply of FX was well below the demand at the prevailing overvalued exchange rate.

It noted in the report that the spread between the official and parallel rates widened to 60% by October 2016.

In November 2016, the central bank devalued the official rate close to the parallel rate, removed restrictions on banks’ ability to set their own buy and sell rates, eliminated the priority import list, and allowed the exchange rate to be market-determined.

“The move to a flexible exchange rate regime was also accompanied by a significant tightening of monetary policy, including raising key policy rates”, it added.

The country’s fiscal policy was also tightened, and several reforms were implemented in the context of a 3- year program with the International Monetary Fund (IMF), which led to a jump in non-resident inflows and a recovery in official reserves to the equivalent of 6 months of import coverage by 2019.

In September 2017, the authorities in Uzbekistan liberalized the foreign exchange market, and the official exchange rate depreciated by 50%.

A conservative fiscal stance and low government debt provide Uzbekistan with a strong base for pursuing remaining structural reforms, the report stated.

However, IIF noted the impact of these reforms cannot be understated, as Uzbekistan is one of the few countries in the former Soviet Union that avoided economic contraction altogether in 2020.

The report reads that since the beginning of this year, the new government, with the support of the international community, started implementing an ambitious reform program.

On February 21, it was noted that the Central Bank of Sudan instructed banks to unify the official and parallel exchange rates by moving the official rate close to the parallel rate.

“Banks now declare rates within 5% above or below the central bank rate based on market supply and demand, and their profit margin between buy and sell prices may not exceed 0.5%”.

On March 26, the IMF and World Bank pronounced that Sudan could become eligible for debt relief under the Enhanced Heavily Indebted Poor Countries (HIPC) Initiative.

IIF said the debt relief and reforms will help Sudan improve economic prospects and help to stabilize the unified exchange rate, or even lead to some appreciation.

In Angola, the sharp depreciation of the official rate since 2018 and reforms have helped to eliminate the backlog of documented unmet foreign currency demand; narrowed the spread between the official and parallel exchange rates (from 140% in September 2017 to 18% in March 2021); and eliminated the REER misalignment.

The Institute said the sharp depreciation of the official and the parallel rates in 2020 was mainly to the impact of the pandemic and the plunge in oil prices. In recent months, both rates appreciated slightly as oil prices recovered.

In 2020, the Banco Nacional Angola de Angola (BNA) enhanced the use of open market operations to drain excess liquidity from the system and increased the reserve requirement on banks’ foreign exchange deposits (to be settled in domestic currency).

“Despite these tightening measures, annual inflation remains high at around 24% in March 2021 – partly due to pass-through impact of continued exchange rate depreciation”, IIF said.

In Argentina, the parallel market re-emerged in late 2019 as the central bank reinstated capital controls.  Despite the August 2020 agreement to restructure $65 billion of foreign debt and the 50% depreciation from end-2019 to April 15, 2021, the spread between the official and parallel market exchange rates has widened.

“Given the restrictions to access FX through official channels, investors and retail savers tapped increasingly into the parallel market”, the report said.

Also, the perennial monetization of the large fiscal deficit – 8.5% of GDP in 2020 – has manifested itself in the FX market.

IIF said while the official exchange rate continued to crawl, ample peso supply spilled over to the parallel market.

Successful stabilization and unification of the official and exchange rates will likely require an IMF program with additional fiscal and monetary tightening and formal targets to wind down monetization progressively.

It was noted that the real effective exchange rate (REER) has depreciated from 86 in 2015 to 55 in 2020 (2000=100), saying it is difficult to know ex ante what a stable, market-clearing exchange rate would be for Argentina.

Lebanon’s political, economic, and financial situation is highly uncertain, and the country joined the club of problematic currencies in late 2019, IIF explained.

The Institute said the main political parties have been negotiating for more than 8 months to form a new government.

While the official rate, at LL1507 to the dollar, has been fixed since 1998, IIF stated that the parallel exchange rate continued to depreciate, to an average of LL12,400 in March 2021 due mainly to the loss in confidence among currency traders in the ability of the current political establishment to implement a comprehensive economic program, political paralysis, and financial crisis.

Available official reserves are depleting, and Banque du Liban (BdL) will not be able to continue subsidizing the imported cost of essential goods, including fuel, medicine, and wheat.

IIF said the collapse of government revenues in Lebanon in 2020 was largely due to using the highly appreciated official rate for all tax revenue calculations from imports (VAT, customs, etc.), and to acquire imports of fuel and other basic products, which were partly smuggled to neighboring Syria.

Iran continues to be tormented by misguided economic policies and external pressure, the Institute said in the report, noting the parallel exchange rate has depreciated from 64,000 rials to the U.S. dollar in June 2018 to 250,000 rials in March 2021.

IIF said imports of basic products (like medicines) are at the highly subsidized official exchange rate of IR42,000/US.

It added that Iran’s attempts at exchange rate reunification in 1994, 2002, 2012 and April 2018 have failed, as U.S. sanctions and lack of deep economic reforms have caused the spread between the official and parallel rates to widen to more than 500%.

However, the Institutes stated expectation that the parallel rate will appreciate significantly in the second half of this year if an agreement is reached to renegotiate the nuclear deal.

“Such an agreement combined with tighter monetary stance and structural reforms would enable the authorities to unify the two rates by mid-2022”, it added.

On April 15, 2021, Syria devalued its official rate from 1256 pounds per USD (fixed since June 2020), to 2512. The more depreciated official rate may encourage private transfers by Syrians living abroad through the domestic banking system rather than the parallel market, said IIF.

The report also reads that sentiment appears to have improved as the parallel rate recently appreciated close to the official rate. However, the heavy reliance of Syrian economy on the availability of hard currency in Lebanon is a major constraint.

“With the shortage of FX in Lebanon and limits on withdrawals and foreign transfers from Lebanese banks, Syrian importers lost access to their U.S. dollar deposits”.

The U.S. sanctions under the “Caesar Act,” which took effect in June 2020, have expanded upon previous measures taken by the U.S. and its European allies.

“With these sanctions, hopes of reconstructing the economy have faded”, IIF said.

In Algeria, the bulk of FX supply is generated by oil and gas exports that must be sold to the central bank. The report noted that a parallel exchange market has existed since the mid-1970s, the longest lasting parallel market in the 12 cases.

IIF said the spread between the official and the parallel rate remains large at 130% in March 2021 despite the modest depreciation of the official rate and low annual inflation rate of around 3%.

It added that the supply of FX on the parallel market is mainly from the repatriation of pensions of former Algerian expatriates; remittances from the current Algerian diaspora; and tourism receipts that are not captured by the banking sector.

“While the number of Algerians living abroad is comparable to Morocco, private transfers through formal channels to Algeria were less than half of those to Morocco”.

The Institute explained that the demand for FX stems from transactions for the purchase of imports that are restricted; capital flight to invest abroad or evade taxes; and speculation based on the expected fluctuations of the official and parallel exchange rates.

“Unification of the markets would be possible through the gradual liberalization of capital transactions supported by favorable macroeconomic conditions, including tighter fiscal and monetary policies”, it stated.

The exchange rate regime in Turkmenistan is not transparent, IIF said while noting that the country has had a multiple exchange rate system for much of the period since independence.

IIF said several attempts to unify the system were not sustained. Demand in the official market is very tightly constrained by exchange and trade restrictions. It was noted that the auction only supplies foreign exchange for state enterprises and government agencies.

“Foreign exchange is supplied by surrender requirements, mostly from gas and oil exports, which account for two-thirds of FX receipts”.

IIF stated that other main sources of FX are remittances sent by Turkmen migrant workers from Turkey and Russia, which declined sharply in 2020.

Most transactions outside the official market are handled in the parallel market. The official rate remained fixed at TM3.5/USD since 2015, while the parallel rate continued to weaken to around TM24/USD in recent months.

As a result, experts said the spread between the two rates has soared to 450%, producing huge profits for the ruling class and their cronies who have access to the official rate.

In Zimbabwe, the government abandoned the peg in June 2020, introduced a weekly foreign exchange auction system, and removed distortions that could lead to rent-seeking behavior.

The authorities also removed FX allocation and allowed exporters to sell more of the surrender amount, and eliminated restrictions set on the rate at which banks can transact in the market.

IIF said in the report that the central bank also adopted tight monetary policy to contain the growth in monetary aggregates and reduce inflationary pressures.

“Since then, the depreciation of the official and parallel rates slowed, and the spread between the two rates narrowed from more than 50% in May 2020 to less than 20% in March 2021”, the Institutes explained.

The very high level of inflation was largely due to the drought in 2020, said IIF, noting that diaspora remittances increased by 58% to around $1 billion in 2020 due to the liberalization of the exchange rate, which helped to channel most of the funds through the banking system.